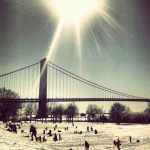 Tons of white, a beautifully submerged Central Park, thick and light here, crystalized and dripping there, kids on sleds, their dads angling them just into position, just right, just here, okay, okay, now, “How do I steer this thing?” “Just pull on that rope, yeah, just like that. No, not like that, like this, see here? See, just pull like this. That’s all.”

And the dads take the ropes and sit beside the kids, still demonstrating, and then get into position, inching ever so onto the boards, just into position and inching further. It’s not a bad idea to take over the back half of the board right here, you see. There’s plenty of room. The kid has no idea what he’s doing anyway. Really. So.

“Here, let me do that for you. There’s nothing to it, see?” And then father and son launch and skid down over the packed tred of other neighborhood sledders, the kid screaming all the way to 109th Street and Dan Newton’s New City Fabulous Deli.

Dad: “Now wasn’t that something? That was really something.” And he grabs the sled and the kid, equally, two hands, and they walk back up the hill, getting out of the way of the next father who comes barreling down, his kid barely holding the rope.