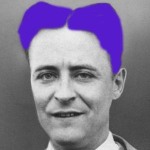 It’s spring in New York and I’m in a flap of a mood having found a stack of papers and books in Columbia’s Butler Library with titles like “The Notebooks of F. Scott Fitzgerald” and “Conversations with F. Scott Fitzgerald”. The best of the writings deal with Fitzgerald before Zelda and, in the deep of the season, I like hearing from the man himself about how he held together through transition, time, and matters of the heart. Fitzgerald knew something about pain.

On the sledding slopes of St. Paul, Minnesota in 1915, Fitzgerald met and fell in love with Ginevra King. She, by her own report and the account that constitutes nearly all of Fitzgerald’s work—all those dreamy, desultory women—loved him too. They sent letters to each other. Fitzgerald intended to marry the slick socialite. But the self-described “fickely” took a sodden turn, saying yes to a proposal of marriage from Chicago tycoon William Mitchell. Some say, for better or for worse, Fitzgerald was never the same.

When they could speak again, King agreed to Fitzgerald’s request that she destroy everything he had written to her and, for the most part, she did. But the 1918 letter Fitzgerald wrote congratulating King on her engagement survives. “Doesn’t it make you sigh with relief to be settled and think of all the men you escaped marrying?” he wrote. “As Ever, Scott.”

Scott, for his part, kept all her letters, fastidiously binding them with a cover he marked “Personal Letters: Property of F. Scott Fitzgerald (Not Manuscript.)”

Real heartbreak is tenacious. Two decades and three children later, Ginevra met up with the writer when he was already famous, the darling of the American literary set, living in Hollywood and deep in the gin. In his early 40s, he was nearing the end of his life. She asked him about the extent to which she might have inspired The Beautiful and the Damned.

“Which bitch do you think you are?” the reply. The barstool nearly gave way beneath him. They didn’t meet again.

But this is a kind of love. The question, as response, an absolute statement of love. It is possible to feel pain for decades. There are opportunities to commit to the kind of pain that can last a lifetime, to revel in it, to locate it again, and then to swear at it. To swear by it. To righteously fall off barstools in front of it. Fitzgerald made that commitment.

The year he lost King and began that dedicated pain-commitment, Fitzgerald joined the Army. He was stationed down near Montgomery where he met Zelda Sayre, daughter of an Alabama Supreme Court judge. Cue end of Army. Cue move to New York. Cue Fitzgerald shoe-leathering it for a while, looking for a job as a reporter. No papers bit.

Drinking hard, and Zelda was too, things fell apart. It looks like it was more down to the $90 a month wage Fitzgerald was earning as a hack ad writer. You can’t keep in New York highballs for long with that kind of cash, then as now.

The question of money. Fitzgerald felt on the financial outs through much of his early life, especially after his father lost the family’s furniture business. But he likely made more of economic disparity than really existed, even as a perceived link between money and romantic fulfillment never left him. A stanza from his Princeton notebooks (lot 135):

Those wealthy goats
In raccoon coats
can wolf you away from me.

“On the Fourth of July, utterly disgusted with myself and all the editors, I went to St. Paul and informed family and friends that I had given up my position and had come home to write a novel,” Fitzgerald recounted in an interview with Charles Baldwin. “They nodded politely, changed the subject, and spoke of me very gently.”

So no King and now Sayre-less, FSF headed home to his parents’ house in St. Paul (we’re probably skipping a lot of pain here and time alone and notes pinned to curtains and solo meals of ham and peanut butter, all of which we know to be true but moving on, always on). That’s where he turned finally, seriously, toward writing. In short order, Fitzgerald finished the 120,000 word manuscript that would be his first published novel, This Side of Paradise.

Again in New York and a (re)made man, the writer became the toast of the literary set. Sayre revised her earlier misgivings about the writer and rushed to his side. Maybe vindicated, maybe able to swab away some of those battle scars left behind by richer men, or maybe loosened up by success and, well, gin, more gin, Fitzgerald let fly on women:

“I know that after a few moments of inane conversation with most girls I get so bored,” the writer told B.F. Wilson in a 1923 Metropolitan Magazine interview. “Unless I have a few drinks I have to leave the room.”

“‘Be perfectly frank now, don’t you think men are much nicer than women? Don’t you find them more open and aboveboard, more truthful and more sincere? Wouldn’t you a whole lot rather be with a bunch of men than with a group of women?’”

“I had to confess to the impeachment,” Wilson wrote in his article.

Zelda floated into the room. “He says that all women over thirty-five should be murdered,” she said. Zelda was a known and skilled winker.

Narrowly averting homicide, the pair continued on their upward trajectory of parties, gimlets and the completion of a new novel that satisfied Fitzgerald in everything but name. Possible titles included Among Ash-Heaps and Millionaires; Trimalchio; Trimalchio in West Egg; On the Road to West Egg; Under the Red, White, and Blue; The High-Bouncing Lover. Fitzgerald wrote what would be his best-known work–The Great Gatsby–in 10 months flat. He was 28 years old.

The ebb of that trajectory featured writer’s block, drinks, more drinks, let’s have a few more drinks, get me a drink after this, will ya? to hell with the women let’s drink, plus some manic ballet for Zelda that she paired with two rounds institutionalization, the second one permanent.

“I left my capacity for hoping on the little roads that led to Zelda’s sanitarium,” Fitzgerald wrote of her final commitment.

I want to think about these people and this history because I am concerned about the prospect of being hurt or scarred or knocked down for such a long time, perhaps for life, and the prospect that that nasty old scar, that ragged old thing, might not be so bad. Might be, in its own way, a salve. Fitzgerald the drinking misogynist was also the sledding romantic who had to endure the quizzical return of the first woman he loved, the total unraveling of the second and, in perhaps his greatest act of courage, the gentle condescension of friends and family as he trudged back to his childhood bedroom to write his first novel, so rarely an endeavor that leads to boastful toasts. Maybe the best material is located in our greatest pains and traumas and you’d have to be half mad to pursue it but, for those brave enough to climb back up the stairs to our childhood bedrooms—or wherever it happens—and create, you’d have to be entirely mad not to.

In one of her final letters to him, once and former love Ginevra King wrote, “Last night I dreamed you were calling on me, but it went off all right. Only you had purple hair and would insist upon strutting around. You were tapping on all the walls.”